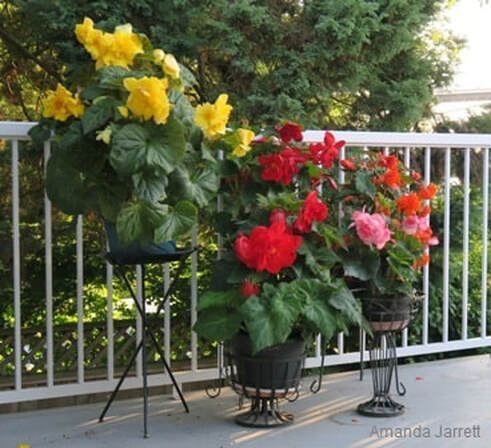 These tuberous begonias are five years old.
Tuberous begonias (Begonia x tuberhybrida) are tropical plants that do not tolerate frost. Because they are frost tender they should be stored in a frost free location over the winter. They are also prone to rotting, especially since their tubers are concave and collect water.  Over crowding often leads to powdery mildew and too much sun fries them, so why does anyone grow them? Because their flowers are exquisite and come in many colours except for blues and purples. They are also quite easy to grow once you get the hang of it. Hopefully this article will help you attain tuberous begonia greatness. 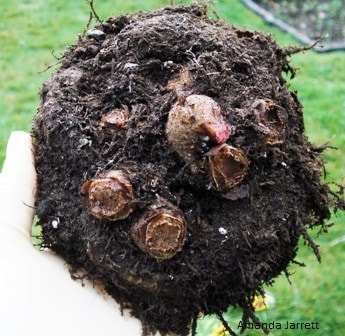 The bigger the tubers the bigger the plant and flowers.
​Start tubers in February for June blooms. Plant tubers indoors in a cool 65 degrees F. (18 C.) dark area 6 to 8 weeks before the last frost date in your area. Place tubers so the depression or hollow end is facing up in shallow pots or trays with moistened potting soil and a slow release fertilizer. Firm them into the soil and lightly cover their tops. If they are planted too deeply they are prone to rot.
​Reviving Stored Tuberous Begonias
When you remove them from storing, look for new buds emerging from the tubers. If there’s plenty of room in the existing pot there’s no need to repot into a larger one; just remove ¼ to ½ an inch of soil from the top and an inch from the sides and bottom and place back in their pot. Be careful not to knock off any of the buds. On the other hand, if the tuber has reached the edges of the container, replant into a pot one or two inches larger. Tuberous begonias are prone to rotting so don’t place in a pot that is too large.
​Soil & Fertilizer
Good drainage is essential, so mix 2 parts potting soil with one part vermiculite or sand. Add a slow release fertilizer according to instructions. Apply a balanced (15-15-15) liquid fertilizer at 1/2 strength once a month. Avoid applying when the soil is dry, water first, wait a day, then fertilize. Stop fertilizing in August. Don’t over fertilize as it often leads to rotting.
​After Potting & Watering
Place in an east facing window or where they will receive bright light but not direct strong sunlight in a frost free location. Water when the soil is slightly dry to the touch – not bone dry. Avoid watering in the centre of the plant to prevent rotting, but do water thoroughly. Don’t place outside until all the danger of frost has passed.
​Health & Flowers
To prevent powdery mildew, a common begonia disease, provide them plenty of air circulation so each plant has plenty of space. Remove spent blooms to promote more blossoms. For larger flowers, thin the shoots when they are 2 inches tall to two to three stems for small tubers. For large tubers keep 3 to 6 stems. Avoid thinning hanging begonias as they are grown for many small flowers, not a few large ones. If you want more flowers pinch back stem tips in May.
Hardening Off
Since begonias are tender, they must be hardened off before they go outside. A couple of weeks before your last frost date, take them outside for an hour in a protected and shady location. Each day thereafter increase the time outside by an hour. Remember tuberous begonias don’t do well in hot sun, so keep them away from afternoon sun. 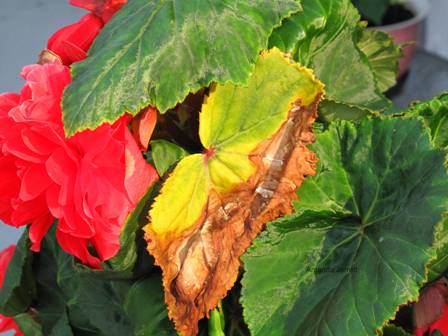 A damaged leaf caused by too much sun.
Overwintering
It's time to overwinter begonias when their foliage yellows and their stems break off from the tuber, or when they are hit by their first frost, whichever comes first. To encourage dormancy, by gradually easing up on their water. Lift those that are planted in the garden and place on some dry newspaper in a frost free location. Wait a week for their stems to break off from the tuber and remove all debris.  Either plant each tuber in pots slightly wider than the tuber or place them in paper bags or boxes filled with sterile potting soil or vermiculite. Place in a cool but frost free location. For those that are already in pots, there’s no need to unpot them. Bring them inside and remove any debris. Store the tubers in a dry, frost free location. Allow the soil to dry, but not so dry it pulls away from the pot and the tuber shrivels.
Powdery Mildew
It’s common for tuberous begonias to succumb to powdery mildew late in the season. It looks like a white powder and it appears on the foliage and flowers. It’s caused by lack of air circulation due to too many stems or from being planted too close together. Morning fog and dew and dry soil also promotes this prevalent tuberous begonia disease. To learn how to control powdery mildew click here.
Copyright © 2017