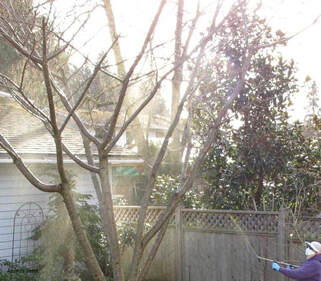 Many insects overwinter on deciduous (non-evergreen) trees, as well as fruit trees and shrubs - including roses. Some hibernate in the bark and stems hidden in the nooks and crannies, whilst others lay in or on the soil around the infected and/or infested plant. In spring, they emerge to continue their lifecycle, which includes eating plants.

Diseases also overwinter. Spores of apple scab, powdery mildew and other fungi cover the plant and the ground. Even where winters are quite severe and long, many plant diseases are still viable and reinfect in spring.

A combination spray of dormant oil and lime sulfur is an organic approach to kill overwintering insects and diseases. Common targeted insects include scale insect, spider mites, caterpillars and their exposed eggs. It also does a great job controlling common diseases on fruit trees such as peach leaf curl, rust, brown rot, downy mildew. Use on roses to reduce black spot.

This dormant spray solution is less harmful to pollinating insects and other beneficial bugs as they are not around this time of year. And unlike other pesticides, the insects and fungi do not develop a resistance; a common issue especially when using fungicides.
​
Apply while plants are still dormant and have not yet sprouted foliage or buds. Spray when there is no rain, snow or frost predicted for 24 hours. Temperature should remain at 0°C (32°F) or above for at least 24 hours. Avoid spraying on evergreens (cedars, rhododendrons etc.) as it may injure them. Apply in the morning so the plant will be dry by evening. Don’t apply if frost is predicated overnight.

Although this sounds like the window of applying this organic pesticide and fungicide is rather narrow, it's usually doable. And it works. I have noticed a huge difference in my apple tree especially when I neglect to get the dormant oil solution in time - like last year. My poor apple had lots of issues, much more so than previous years when I managed to get the job done.

Usually the end of January to the beginning of February is the window of opportunity, however, since I live in the temperate climate of southern British Columbia, spring sometimes come early, catching me off guard (in a nice way). There's been a couple of years when I the plants sprouted at the very beginning of February. Oh no! For most of Canada the window of opportunity is usually late February and into March. 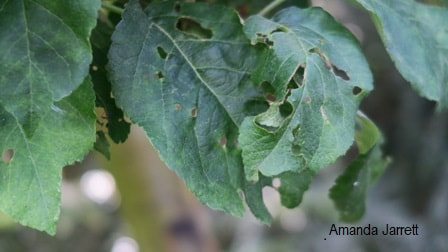 Control caterpillars on apple trees.
Although dormant oil/lime sulfur is not 'toxic' to humans, cover yourself up as it's rather stinky. Wear rubber boots, cover your arms and legs, a hat, wear glasses (don't want it in your eyes) and rubber gloves. Wash your hands and face after applying even if you use a face mask.
​
Cover the plant entirely so it is dripping off and spray the ground too as it also harbours overwintering pests and diseases. To apply this product to tall plants, I use a trombone sprayer, but a backpack sprayer would be suitable. It makes a fine mist that goes quite high into the tree canopy. You can also use a hose end sprayer for smaller plants, but use the mist setting.

This one time application per year works wonders so consider it if you have buggy and diseased fruit trees, roses and other deciduous shrubs and trees. ​
Copyright © 2017