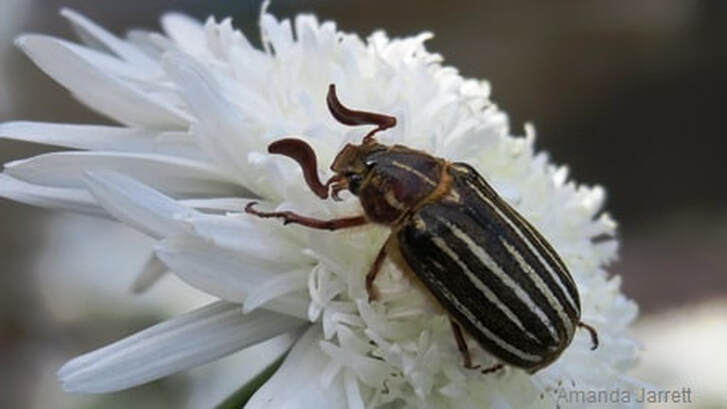 A Ten-lined June beetle.
Ten-lined June beetle (hissing beetles, watermelon beetles)
The first time I saw this beetle it was in my office. It was on its back in a great deal of distress with its little legs flailing away. I felt sorry for it as it had obviously taken the wrong turn. I had no idea what kind of beetle it was other than it was big, and not too smart. Research was in order, so this is what I found out about this rather large and impressive beetle.

It is a Ten-lined June beetle (Polyphylla decemlineata) and it’s Native to North America. This large 1 inch (2.5) brown scarab beetle bears distinctive numerous white lines down its back. When disturbed it makes a hissing sound, although I didn’t hear anything when I retrieved it from my office. Maybe it was just too verklempt.

Their larva are similar to chafer beetle larva, as they are close relatives. The C-shaped grubs grow up to 2 inches with creamy white bodies and 3 pairs of legs situated near their brown heads. The grubs live in the soil and feed on plant roots. Infested plants wilt, even with adequate water, and are stunted.

The adults are nocturnal and hide among the plants during the day, but they do not feed on them. At dusk they seek out mates then hover around lights come nighttime. The adults emerge in late June through July in British Columbia and the Pacific Northwest. To control cultivate the soil to expose the grubs, discarding them as you go. The birds and other critters will help you control them as they seem to think they are quite tasty. ​ 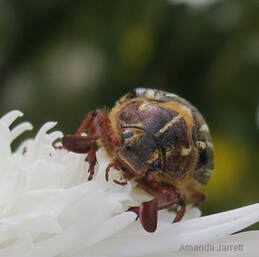 Ten-lined June beetle is also referred to as the Watermelon Beetle.
Copyright © 2017