The Invasion of the Japanese Beetle

The British Columbia Landscape & Nursery Association has issued a warning for all gardeners, farmers, landscapers, garden centers and plant nurseries regarding the Japanese beetle. It has arrived in British Columbia. This is not good news. 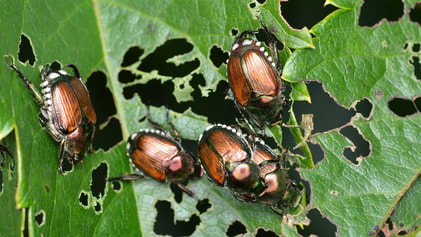 Japanese beetles make lace out of foliage.
The Japanese beetle is a very destructive pest, so much so that it might end up being a game changer for the plant industry and home gardeners alike. The Eastern United States has been dealing with this beetle for numerous years, but they have proper winters, with months of below freezing temperatures; we don’t.  In the Lower Mainland of BC and most of the Pacific Northwest our winters are mild, which will not kill any overwintering Japanese beetles. Again, this is not good news.

The area is bounded by Burrard Street in the west, from English Bay up to West 12th Avenue, along 12th from Burrard to Clark Drive, and in the east along Clark Drive from East 12th to Burrard Inlet.
Weekly recycling of green waste will continue as the trucks are enclosed so the beetles cannot fly out (hopefully). To further reduce the spread of infestation, plants must be shaken to ensure the beetle isn’t present then they can be placed into the green waste bin.

The threat of this beetle is so serious that the City of Vancouver is applying the larvacide Acelepryn, to all lawns in public areas, including numerous parks: David Lam, George Wainborne, Coopers’, Charleson, Sutcliffe, Emery Barnes, May & Lorne Brown, Crab Park and Thornton). It’s not harmful to animals, butterflies, pollinating insects, pets or people.

What to look for 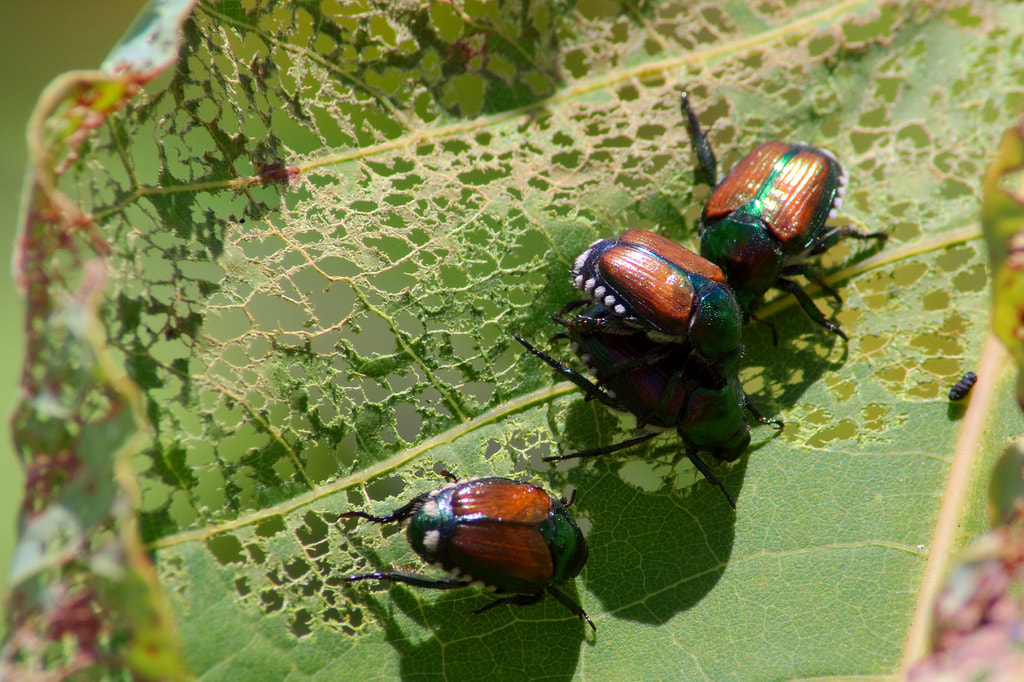 Note the white tufts of hair in their rear abdomens.
The adults eat the green tissue between the leaves so that only the veins remain (skeletonizing) so they resemble lace. Symptoms will appear at the top of the plant at first then will continue downwards.  They like to feed on plants in hot sun. When disturbed they drop to the ground.

What they Feed On

They devour more than 300 different kinds of plants, including blackberries, which grow wild here –uh-oh. The feed on foliage, flowers and damaged fruit. 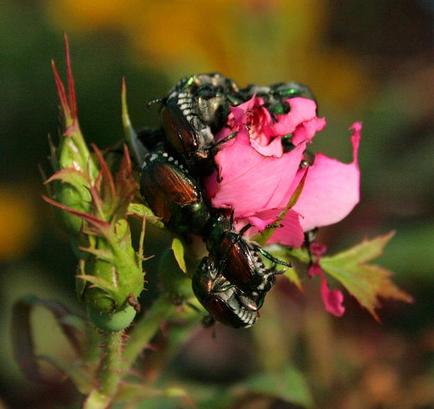 This rose doesn't have a chance.

​Shaking Plants:
Since they drop to the ground when disturbed, shake the plant so the beetles will drop onto a drop cloth. Gather the insects and drop them into a container of soapy water. Do this in the morning when they are sluggish.
Row covers:
Floating row covers are a super way to protect vulnerable veggie crops. Cover crops with hoops with spun bonded polyester over top the hoops or plastic to make a mini greenhouse.
Handpick:
For those that are not squeamish, then place in a container full of soapy water. Fun times.
Traps:
Apparently, Japanese beetle traps may entice the beetles to your garden. Unfortunately the traps don’t trap the adults effectively. If you do want to try them out, place traps away from the plants they like to feast on.
Spraying Plants:
Other forms of control includes spraying the adults as they feed. No matter what you use, you have to hit the beetle in order to kill it. Read the instructions on the product label before applying. Don’t spray on windy days, just before rain, and don’t spray anything including soap on water when the sun is shining on the plant.
Neem Oil:
An added benefit of using neem oil is the beetles pass on the harmful chemical to the larvae killing both stages of the beetle. Don’t apply neem oil anywhere there are bodies of water with fish.
Soap & Water:
Combine 1 teaspoon of liquid dishwashing detergent into 1 cup of vegetable oil then shake well. Pour the mixture into 1 quart of water then add 1 cup of rubbing alcohol. Shake vigorously then pour into a spray bottle. Don’t spray when the sun is shining on them, just before it rains and on windy days. Repeat every 10 days until all subsequent populations of the beetle are dead.
​Killing Grubs:
In April/May and October/November, spray the lawn with 2 tablespoons of liquid dishwashing liquid to 1 gallon of water. The grubs will come to the surface so you can pick them up or leave them to the birds and critters.
Plant Selection:
It makes sense to avoid plants that attract Japanese beetles or at least disperse their favorite plants rather than grouping them together. Companion planting is also a useful practice. Plant rue, tansy and garlic around your vulnerable plants.
Beneficial Insects:
Attract parasitic wasps (Tiphia vernalis or T. popilliavora) by planting peonies. The peonies are not damaged by the wasp, but the wasps love them.  Preferred peonies are Big Ben, Sarah Bernhardt, Bowl of Beauty and Festiva Maxima. Another favorite plant for the wasps are Queen Anne’s Lace. 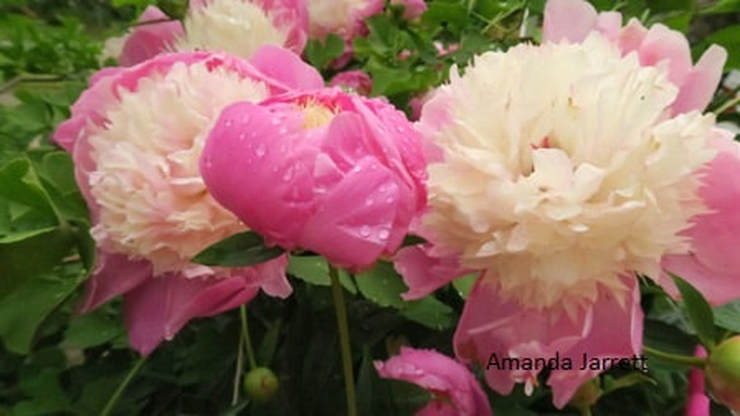 Bowl of Beauty attracts beneficial wasps that prey on Japanese Beetles- yay! And they are so pretty too.

​If you think you have seen this pest on your property or on public lands, please contact http://www.inspection.gc.ca/jb or call 1-800-442-2342. It is essential that we all work together to control this very harmful species.