Bugs in the GardeN 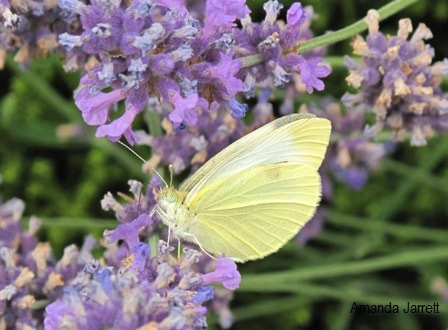 A cabbage white butterfly pollinates a lavender.
A healthy garden is one with lots of all kind of bugs; decomposers, pollinators and beneficial insects that kill other insects that feed on plants. Obviously, insects have many important roles and play a major part in keeping the garden in balance, despite the fact that some do feast on our flora.

Next time you see a creepy crawly in the garden think about what it does for a living. Decomposers include centipedes, millipedes, earthworms, slugs, spiders, beetles, sow bugs, snails, springtails, ants and flies. Pollinating insects include wasps, flies, moths, butterflies, beetles and many types of bees. Ladybugs, lacewings, spiders, ground beetles and hoverflies are a few beneficial insect that feed on other bugs. Parasitic wasps lay their eggs in caterpillars, which hatch and feed on their host. Other plant predators are food for birds, frogs and toads. Let’s not deprive them of their food source.
​
My point is that every organism no matter how annoying, unsightly or destructive they are in our opinion, each and every one has a role to play. It is a theatre in another universe; a drama playing out in a micro universe. ​

When Insects Become a Problem 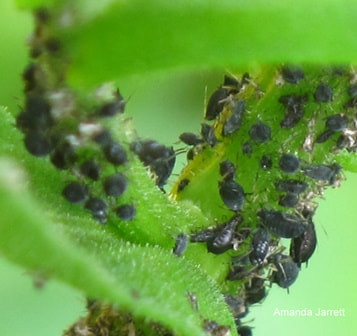 Aphids love fresh new growth.
Insects become a problem when their populations grow to such an extent that plants are overwhelmed.  A few nibbles here and there usually isn’t a problem as plants have the ability to fight back – well healthy plants anyway.

Insects hone in on the weak; plants that are kept too dry, too wet, ones growing in too much shade or not enough shade. Then there is too much of a good thing. Giving plants too much nitrogen beckons insects as it spurs on new tender growth, which many bugs feed on with gusto. Alternately, hungry plants that don’t receive enough food can’t fight back and succumb easily to attacks.
​
Keeping plants healthy gives them the resources to retaliate. Sickly plants lure predators with a hormone called ethylene. We can’t sense it, feel it or smell it, but insects do. Insects actually rid the gene pool of the weak so the strong survive. It is nature's way and it works and has done for millennia.

It's all well and good saying that plant pests are getting rid of the weak, but no one wants buggy plants. Half the battle is to figure out why the plant was targeted in the first place, and that can be quite difficult. Inspect plants closely by looking under the leaves, along the stems and where the leaves meet the stems. Check any dead and dying parts for any critters and their excreta. If you don’t see anything during the day, take a flashlight outside at night and inspect those that are being eaten. Grab a cup of salty, soapy water too so you can just drop the critters in to easily discard them.

Typical symptoms of an insect attack include leaves that are rolled, chewed, puckered or bear holes. Other tell-tale signs includes lacy foliage where only their veins remain as insects have eaten all the tasty tissue in between. Then there are leaves that are supposed to be solid green but instead they are mottled or stippled and look a bit dusty.

It is normal for a few leaves to be chewed so don’t get a knickers in your twist if there are a few bugs chomping away. It is when they overwhelm plants that you should question what is going on. So before you start thinking of using any pesticide, even soap and water, try fixing the problem instead of dealing with the symptoms. Try to determine why the plant is weak as it will be a never ending merry-go-round of pesticides, and a waste of time and money if you don’t. 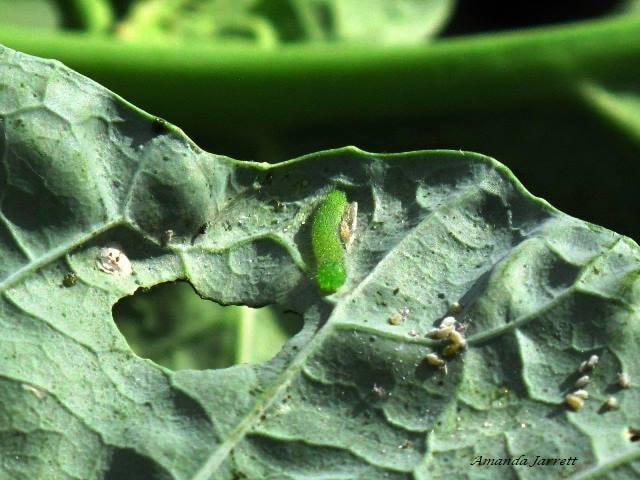 This kale leaf is being eaten by a cabbage white caterpillar and aphids.
Copyright © 2017