It's difficult to grow hollyhocks without them suffering a bit of rust.
​Rust (Phragmidium spp.) is a common disease found on roses, beans, tomatoes, snapdragons, hollyhocks, fruit trees and many other plants. I admit it’s difficult to grow susceptible plants, such as hollyhocks, without them getting rust. Since they are not perennials, most people don’t bother with treating them with fungicides, as they often soldier on despite the infection.
Symptoms: Lower leaves show the first symptoms with yellow spots on topside with whitish pustules on the undersides. The pustules mature to a reddish brown then become black and penetrate through to the topside of the foliage. As the infection progresses, the pustules drop off leaving small holes. Leaves yellow, becomes distorted and eventually fall from the plant.
Conditions: Rust is a common summer disease as it prefers warm temperatures, long days, high humidity and/or precipitation. The fungus is more prevalent when leaf surfaces don’t dry off quickly when it’s foggy, rainy and muggy.
Disease Control: Remove all infected parts from the plant when they first show symptoms. Pick up any that have fallen on the ground. Discard diseased parts, don’t compost. Avoid touching infecting plants when they are wet to prevent spreading the disease. Disinfect pruning tools after each cut.
Prevention: Fall cleanup is essential as their spores overwinter, ready to re-infect in spring. Select rust resistant varieties where available. Don’t plant susceptible plants where rusty plants were previously located. Water in the morning as plants shouldn’t be wet at nightfall. Avoid placing susceptible plants where they will by dripped on by overhead tree limbs and drippy eaves.  Use soaker hoses and drip irrigation where practical. Too much nitrogen makes plants more susceptible, especially new growth. Improve air circulation by trimming neighbouring plants, and thin overcrowded areas. Treat susceptible trees and shrubs with dormant oil and lime sulfur in late winter just before bud break in spring. This combo organic spray kills overwintering insects as well as diseases.

Rake soil of infected debris then apply a 3 inch layer of organic mulch on top of the soil and around the plants. If mulch exists, top it up to 3 inches, where needed. Use broad spectrum organic fungicides: sulfur, copper or the bio-fungicides Bacillus subtilis. Follow the manufacturer’s full instructions and precautions. Reapply as instructed and cover the entire plant and surrounding soil to kill lingering spores. 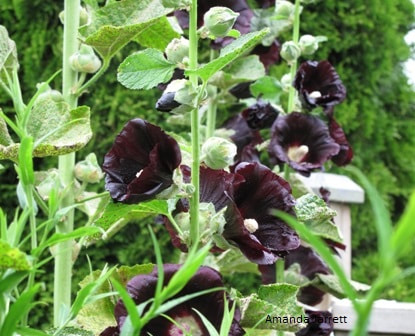 Despite being infected with rust, these hollyhocks still look pretty good.
Copyright © 2017